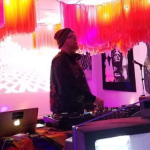 Spike Heart has a love in his soul for all things music and night life. He spent his teenage years as a "Gother" spending thousands of hours listening to music to escape realities of a harsh world he never really felt a part of. When Spike walked into that first dirty warehouse and discovered dance music on August 19th, 2000, DJing and dance music became his passion. It was good times but when 2007 rolled around, Spike felt like something had changed and felt he as unable to keep up with all the amazing talent in his scene. He decided it just was not going to happen for him and called it quits. After a 7 year hiatus from DJing, he picked it back up when in 2014 and being in the right place at the right time, got him a job for a mobile DJ company. This enabled him. It also opened a few doors he so desperately needed to be open and after 5 years, Spike was ready to hit the scene again. He could read crowds, not be nervous with hundreds of people looking at him, learned leveling, and he was taught how to have an extra edge in professionalism. With DJing also going digital, he could afford an arsenal of tracks at his disposal to practice with and have ready for any situation on the dance floor. He is able to pick up any genre he chooses and create output. He was ready! Not only did he miss the music, and the vibe so much, he missed his friends as well. At this point, they were all stoked to have him back. Now was Spike's time to shine! However, circumstances proved club life would not be in the cards for him now either. 2 major factors played into this. One reason being how time consuming raising a toddler is. The next was the multiple health issues his wife has been plagued with since she had given birth to his his son, Jax. It was a rotten dilemma for sure, but KLST had a solution. With management being extremely tied up in our personal lives and other business ventures, on top of doing a website reboot and losing all all our content, we have decided to hand the keys over to Spike, making him Talent Manager and Staff Writer to breath some life back into this station. Spike will be able to connect to the underground, the music, and nightlife, being apart of the things he loves, all while being able to stay close to home where he is needed as much as possible.

“At end of day’s the dead will rise from their graves… and rave.” SPIKE HEART 3:16 “It’s go-go-go because this is one epic episode of Graveyard Radio! Not to mention, I got some hot KLST shit in the works, so I’m keeping it as short and sweet as possible” -Spike Graveyard Radio will be starting …

END_OF_DOCUMENT_TOKEN_TO_BE_REPLACED

Copy and paste this to open stream in your media player and tune in wherever you are!